Bartop Epoxy Over Fabric on Counter

Well, in the last post, I'd mentioned that the next one would be more about fences. But, many people have continued to ask about my counter project. With that, we delve into the creation of a counter...

After searching for months on what to do for a counter top, I finally came up with a solution. I mean, if your counter top looks like this... 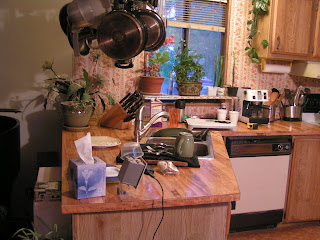 ...It's time to replace it! I understand the need (maybe in the 80's) for a butcher block style counter, but the fake stuff doesn't quite cut it. (No pun intended.) To top it off, this counter is Formica, which I'm NOT a fan of!

After having moved to a new home in the country, I had decided eventually that the entire kitchen would need to be gutted. Thus began the quest for the perfect kitchen. The object was to spend as little money as possible and use recycled materials. However, finding recycled materials for a counter was going to be difficult so I decided to use the creative approach. Formica wasn't an option... No matter what design you choose, to me, it still looks like Formica. Granite was too expensive and tile, too difficult to keep the grout clean. That didn't leave many options.

In this day of Internet search engines, the decision making process becomes so much easier. Originally, I considered copper or concrete counters. Both appeared to take more work than I felt able to do on my own, plus, the cost was more than I was willing to pay. This is when the idea of using bar top epoxy became a possibility. If you've ever been to Lincoln's 50,000 Silver Dollar Bar in Haugan, Montana (click here for link), you will see first hand how bar top epoxy can be used over most anything. The Silver Dollar Bar's bar top is what gave me the original idea. My next step was to decide what would go underneath the epoxy.

To make a long story short, I eventually came to the conclusion that I could put fabric down and pour the epoxy over the top of the fabric. I purchased black fabric with sparkles on it from the 75% sale bin at JoAnn Fabrics. I then ordered four gallons of Kleer Kote epoxy on-line. (Click here for link)

After recycled cabinets were installed (this process will be a future post), I had a friend cut and install the plywood for the counters, along with the trim pieces. 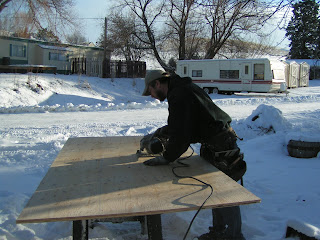 "Kitchen Tom" (because he's a cook) cutting plywood in sub-zero temperatures
After the plywood was put into place, I applied two coats of clear polyurethane to seal it. While waiting for it to dry, I prepared the trim for the edges by priming and painting them a glossy black to match the color of fabric. Since the finished counter was going to be shiny, it only seemed appropriate for the edges to be the same sheen as the counters. 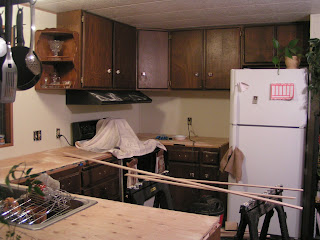 Plywood in place and trim ready for priming and painting!
The next step in the process involved applying the fabric to the plywood. After various methods of experimenting, I found that using decoupage (Mod Podge from Michael's) worked the best. At first, I tried the spray on adhesive, normally used for scrap booking, but found it to be too messy because of the "over spray." Not knowing how the fabric would look through the epoxy, I assumed the detail in the fabric would show through so I took great care to measure everything. I started by gluing down strips of a matching sparkly fabric around the edges of the plywood: 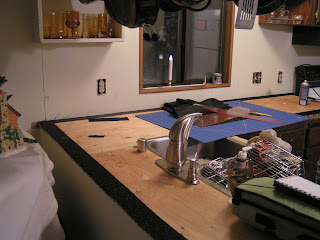 Fabric install starts with outer edges. A slight overlap is created
so material can be tucked under the trim. 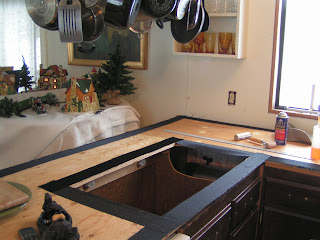 Outer edge of fabric installed. Now, onto the center pieces... 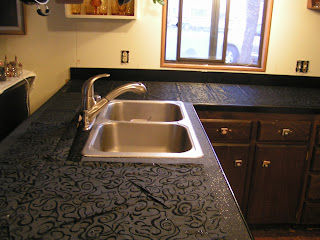 Center fabric in place and ready to glue down. 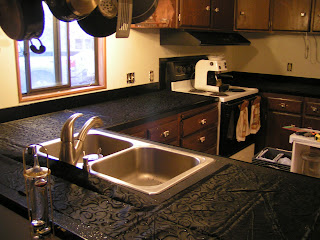 A closer look at the detail in the fabric.
Once the fabric was glued on, I did the following:
After everything was in place, it was time for the pour! It's VERY important to follow the manufacturer's instructions exactly! Failure to do so will result in either the epoxy not hardening or other variable results. First, we poured the "seal coat" which seals the the materials that are set into the epoxy. In hind sight, I should have sealed the fabric with a coat of polyurethane since fabric is a porous product. Although this particular fabric appeared not to be porous, it's still fabric. The finished product looks nice but there are places where the epoxy soaked into the fabric. 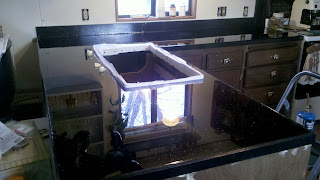 The counter after the flood coat dried. Notice that we used styrofoam lined with visqueen to
"dam up" the sink area so no epoxy would drip over the edges.
Once the seal coat dried, the "flood coat" batch was mixed and poured on (as seen above). NOTE: For the seal coat, we used a hair dryer to get the bubbles out. Some of the manufacturers recommended a small propane torch (as seen in the above picture sitting on the stool) and others didn't. We found that the torch worked MUCH better and quicker. As the epoxy starts to set, the bubbles rise to the top and need a little assistance in popping. The torch was the perfect tool for the job!
When pouring two gallons of epoxy at once, the job goes much quicker if two people are involved. Because the epoxy begins the drying process quickly, once it's poured, you only have about 30 minutes to spread it and work out the drying bubbles. Kitchen Tom helped again. He poured while I spread the epoxy across the counters. We both took turns popping bubbles. In my home, because I have a wood stove, the house was quite hot (which is recommended) and, the epoxy began to dry even quicker. The hotter the room temperature is, the quicker the epoxy will dry. 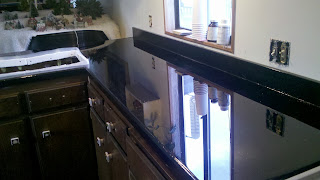 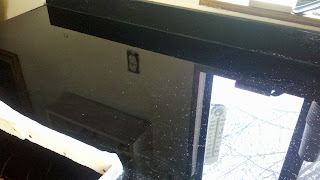 We expected the detail of the fabric to shine through...
As seen in this picture, it's the sparkles that you see!
The finished product? What is visible are the sparkles in the fabric, not the texture.  Since the fabric is black, apparently, the detail can't be seen. However, the sparkles shine through very clearly! I found it amazing that although granite would have been nice (drool!), this finished counter looks like granite! What an unexpected surprise.
This project being my first epoxy pour, I learned some valuable lessons. The entire project took a total of four gallons of Kleer Kote epoxy. Lessons learned for the next pour? See below...
Now that this project is done, I plan to do both bathrooms. I've already picked the fabric and will be sure to learn from my mistakes. Final cost for these beautiful counters? About $350! 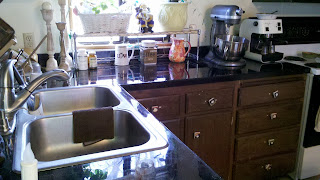 My new and improved kitchen!
We end this project with the approval of Zoe, my Maine Coon. She has decided that the counters are good enough for her... 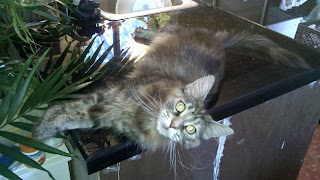 That's all folks!
Posted by Del Hungerford at 11:50 AM