I was frequently asked, "Why do you want to build a shed of doors?" Answer.... because it's cool and no one else (probably) has one like it! Even a cheesy looking used metal shed was going to cost me $500. I did the fence/shed combo for under $1,000. After being faced with boring choices, I decided to build a shed out of doors. In the spirit of recycling, a door shed could be built with at least 95% recycled materials.
The idea was to have the door fence "morph" into a door shed. In addition, it would be hard to know which doors open or close. Just to throw people off, I added extra door knobs to several doors on the fence (and planned to do so with the shed, too).
Let's start with doors... again, every door was set out, measured and catalogued. 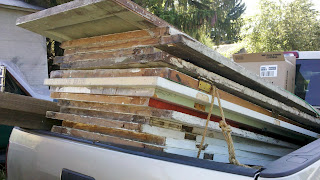 "Bubba" the truck, transports a pile of doors from the Habitat Store 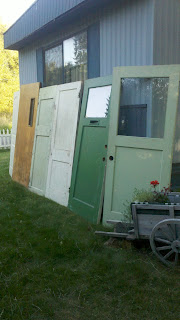 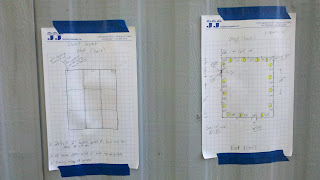 The final drawings: floor plan and diagram of door placement
If you're not quite sure how to do everything, find someone who can help you work through the process.... enter... my neighbor Edd. Edd's quite the guy; he seems to know how to fix just about anything! We begin with simple plans and decide to use recycled treated 4 x 4 lumber for "skids" and support poles. Just like the fence, I dug three holes for very long treated 4 x 4 posts. 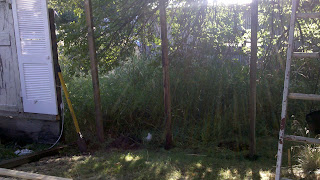 Posts in the ground and ready for skids.
Next, we decided to take more treated 4 x 4 poles and turn them into skids. We attached a 2 x 4 across the back of the vertical poles (leveled with the ground where the front of the shed will sit) so the skid boards would all be level. The skids were then attached to the 2 x 4 and vertical poles (eventually to be made stronger with carriage bolts). On top of the skids, we placed wooden pallets that were all the same size and thickness. (Thank you for the free pallets Moscow Building Supply and J.J. Building Supply!) Next, we attached the pallets to the skids. 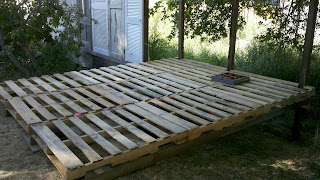 Skids and pallets in place... ready for the floor!
For the next part, we had to purchase new plywood. The used plywood we'd been given was rotten. There always has to be a plan "B." We cut the plywood to fit and then started nailing... and nailing... and finally put some deck screws in to really make sure it was all secure. We all got a little "hammer crazy." 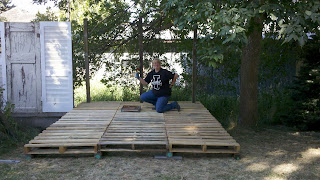 Watch out... woman with a hammer! 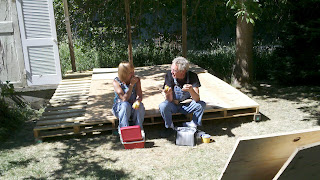 Nick and David take a break during plywood-attaching process.
After the floor was finished, we attached the back doors first to the vertical poles. We chose the shortest doors (all doors are solid core) for the back wall because we planned to build a "shed roof" with a slope so rain and snow would fall off the back, not the front. Once the back doors were on, we built a frame to attach the side doors. The bottom of each door was attached to the skid below the pallet; the top of the door, to the upper frame. 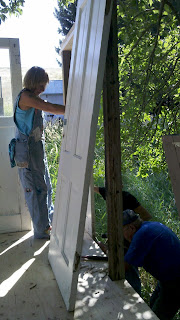 Doors going on back wall! 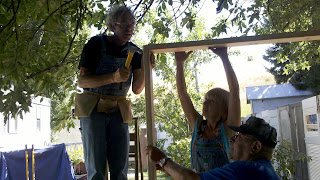 Hold the frame still while I hammer these boards together!
Break time! This project ended up taking two Sundays. About the time we had the frame up, it was way past lunch time... Edd needed a break so it was mocha time for all! Everyone sing now (to the tune of "Louie, Louie") Mocha, mocha.... yo baby, make my mocha, mocha... ya, ya, ya, ya, yaaaa.... (repeat). 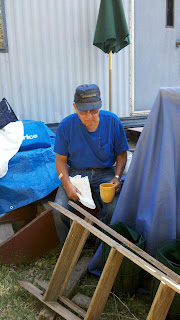 Hey Edd... How's that mocha?
The side doors went up next and were attached to the frame via amazing "torque" screws. Why I never discovered these before this project, I'll never know! They save sooooo much time!!! No pre-drilling really necessary. David was the man in charge of power tools, Nick helped him hold doors, Edd supervised, and I carried supplies (including very heavy doors) back and forth. 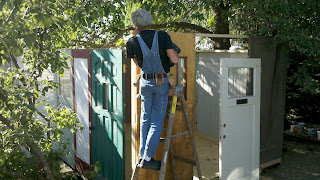 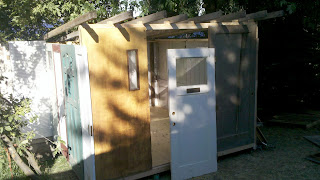 All doors on (with the exception of the front door)...
Wait! Don't tell anyone which is the front door!
Did you wonder how the front doors were secured? Well, we attached a 2 x 4 across the front (on the floor) to the sides of the frame that supported the bottom of each door (via a few screws). Of course, we left an open space for the front door. Then, we attached all the top beams for the roof (see in above picture). The roof pieces were salvaged metal siding given to me by a friend. After being cleaned up and making sure the holes were all plugged up, we began the process of putting on the roof. We then took apart an old cedar fence that I found on Craigslist... 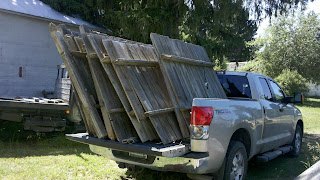 Bubba, it's amazing how much fencing you can hold!
Nick and I did a spectacular job of taking the fence apart. I then "manned" the circular saw (watch out... woman with power tools!) while Nick and David measured and fitted the cut pieces of the cedar fence about 1 inch below the top of the doors up to the roof line. This created a very rustic look. Putting on the roof and "trim" above the doors took most of one entire day. 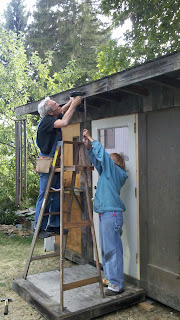 Nick and Dave put the final screw in the trim! 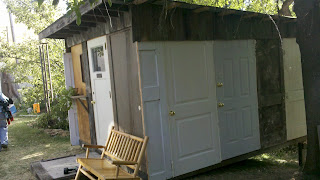 A view of the finished product from the side! 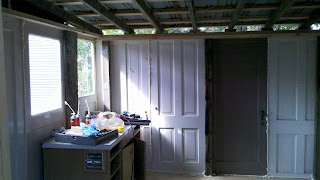 Inside view before the trim was installed.
(Note the old bathroom cabinet being used as a counter...)
No project is complete without the group posing for a final picture! Our cast of characters for this project included (from left to right) Edd, Nick, David, and me (Del). In the end, we used nearly 98% recycled materials. Other than the plywood, screws (even the nails were recycled) and some of the 2 x 4's, all materials  were "re-purposed" from other projects. We even had fun putting a little shelf for plants and hanging a very large wind chime off of one corner. The bench out front? Well, it came from Rosauer's. It had been thrown away (because it was broken) so one of the workers gave it to me. All fixed and ready to go, the new shed looks like a miniature home! The overall size (inside) is 10 x 12 and is large enough for my tools on one side and storage of school supplies on the other. 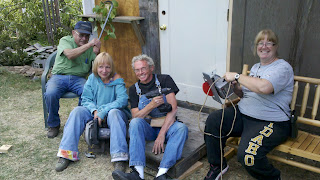 Watch out Nick! Edd has a crow bar!
After the shed was complete, we had a visitor! Well, actually, we've had two visitors "of the wild kind." The first was within a few days of finishing the project... 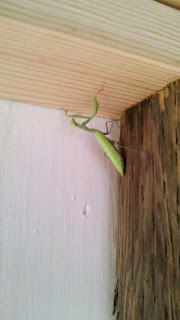 "Manny" the praying mantis takes up residence inside... 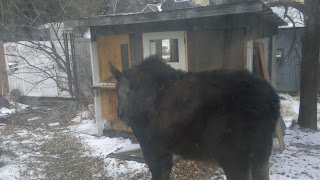 Duh... which door do I use to get in?
For now, that's all folks! Are you curious what I did with the rest of the cedar fence? Keep checking back for the next installment of our story! The only thing missing is a sign for the front door... "Packages accepted at back door." What's up with that? Yes, I'm trying to confuse people. At least the moose is confused...

Using recycled doors in a fence 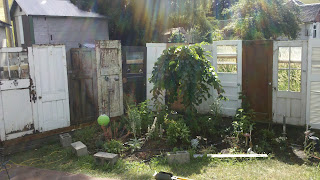 Have a bunch of old doors you don't know what to do with? Build a fence!
This project started out as a simple "vignette" for an outdoor space. Trying to showcase the beautiful camperdown elm (shown in the center), the idea was to frame it with doors and build a small flowerbed in front of it. The above picture shows the semi-finished product. (The flowerbed is still in need of a border.)
Morphing from a small vignette into a full-fledged fence (to help keep neighbor dogs out of my yard), this project took on a much larger scale. Over a period of two years, I collected approximately 50 recycled doors from the local Habitat for Humanity Store and a reclamation yard near my home (Wasankari Construction). All the while, my elm tree, that I call "Happy Camper," continued to grow into a nice bushy shape. Nestled next to a pond (that I also built), the plant life in this corner of the yard was beginning to look rather nice!
Enter... summer 2011. I finally had enough doors to begin the project. After purchasing enough 4 x 4 treated poles, I dug 3-feet deep holes (8 feet apart) for the poles and secured them with gravel and dirt. They were tall enough to mount the doors within a frame. I then decided which order the doors would be put in the fence and lined them all up against the outside of my home: 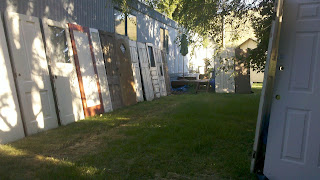 Hmmm... how many doors does it take? That is a good question...
When you have great friends that love to be outdoors, you invite them over to help! Thanks to Nick, Dave, and my neighbor Edd, we got this show on the road! After setting the posts myself, the fence building crew begins construction: 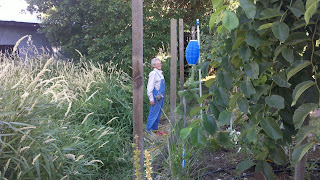 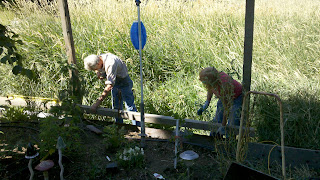 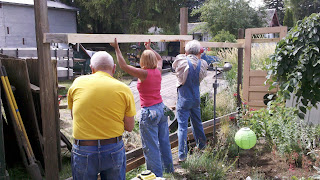 Edd, Nick, and Dave attach the top 2 x 4's
After the frame is assembled, we begin the process of mounting the doors. Nick held them in place while Edd and Dave used decking screws to attach the doors to the frame. (This was before I discovered "torque" screws.) 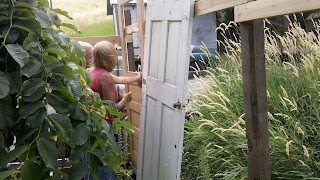 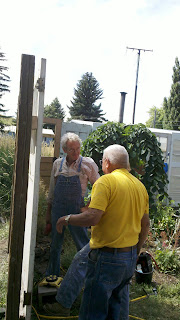 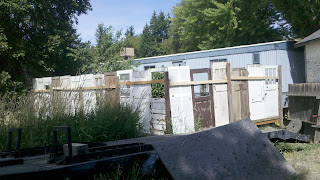 The finished product as seen from the back! 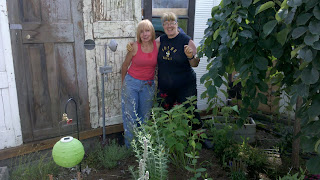 Showing off the finished product as I give instructions to the photographer... 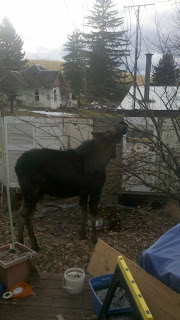 Winter time has come.... Mr. Moose has decided to eat the apples that I neglected to pick!
Well, there you have it... a fence built out of doors. I get asked all the time where I came up with this idea. Being a musician lends itself to creativity. I'll start there... The rest is all about finding economical methods of doing various projects. The entire fence cost less than $500 to build (including doors). Other than the 2 x 4's that run along the top and bottom rails, the fence is entirely recycled. (Well, I also used new screws)
So, what will we think of next? I have more doors so we're going to build a shed out of doors. I've been trying to buy or build a shed. Both, are very expensive. See how I re-purpose doors, pallets, cedar fencing and more for the shed. That will be the next blog post!
Happy recycling!