Back in early July of 2011, I found several 8-foot sections of an old cedar fence on Craigslist. It's amazing what you can find if you look hard enough. Not that I was looking specifically for this fencing but every once in awhile, I check Craigslist for "materials" and "general" items, just to see what people are selling. Once I see something that I like that's a decent price and can be reused, I purchase it.

What I liked about this particular fence is the character of the wood. Much of it had lichen with a nice weathered look. For me, this was perfect for the rustic charm that I was hoping for in my yard. The original intent was to replace the white picket fence in my front yard with something that more closely matched the door fence. 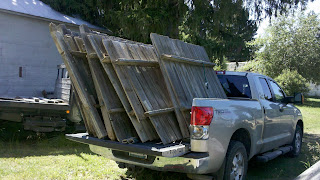 Bubba carries all the pieces of the fence quite nicely!
As seen above, I managed to get all six sections into Bubba. Still not knowing quite what the plan was, I began to take apart the fence by using a special tool (Thanks Edd!) that pulls nails easily. If all else fails, a hammer and screwdriver work nicely, too. I picked a cool spot in the shade and began taking the fence apart, saving the nails that didn't bend. After all, they COULD be used again. 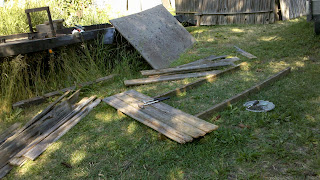 First fence section almost done!
After deconstruction of the cedar fence, construction began on a new fence. Not wanting the fence to be permanent, I decided to put in green stakes and use zip ties to hold the fence in place. You never know when a big truck might need access to the front yard! I was able to get some old railroad ties from my landlord to put the fence on top of. Because that area of my yard is lower, water tends to make it muddy. In front of the railroad ties, more gravel was placed so vehicles parking in front of the fence would be more level with the road. Railroad ties in place, I began the assembly process... 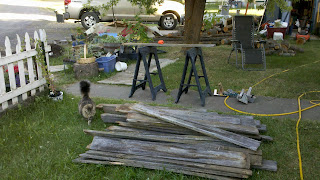 Individual pieces all stacked and ready for cutting to correct size.
(Timber has to check it out, too.)
In the above picture, the current white picket fence can be seen sitting on top of the railroad ties. I wanted the new fence to look similar to the white fence so the new pieces were cut the same length as the original fence. I purchased new 1 x 4 boards for the frame. Next, I decided how much space I wanted between each piece of cedar. 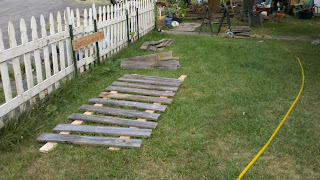 Not knowing exactly what I wanted, I experimented... 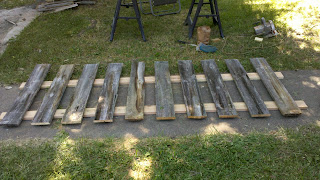 The first 8-foot section all done!
As seen in the above picture, once the decision was made on how far each piece of cedar should be spaced, I laid all the pieces in place and began hammering them to the frame. Of course, I measured to be sure that it was consistent. The space across the front yard only took three sections of fencing. 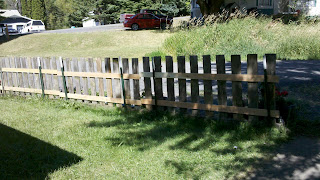 The finished (well... sort of) fence!
As with many experiments, once I got the fence up, it didn't look finished. Somehow, it needed to be extended to the other side of the walkway. Smoke coming out of my ears while meditating on what to do next, I came up with an idea. Some friends had lost a large spruce tree (on their house) during a bad wind storm. They had given me several stumps to use for weight in Bubba during the winter. With muscles in action, I rolled the logs out of my truck and lined them up on the other side of the walkway and prepared more fence pieces. This time, however, I wanted the bottom of the fence to sit on TOP of the stumps. By doing this, I could put baskets of flowers in front of the fence on top of the stumps. So, I did it and this is how it turned out... 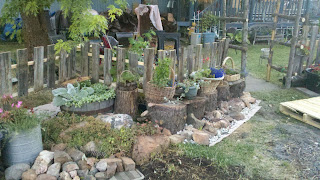 The new "look" to the left of the walkway.
When I first moved in, someone had built a rock garden on the edge of the driveway. It became the center of this section of the fence so it required that I build the fence around the rock garden. Instead of using 1 x 4 frame pieces, I used 1 x 2's since the fence was smaller. I made three sections and attached them to the logs they sit on. A basket sits on each log with annuals to add color to this part of my yard. Since my property is the first one on our street, I wanted our street entrance to be welcoming.
After all of this, I still needed more! My friends at Elk Meadow Farms (click HERE for link) had cut down several trees, which I brought home to build a pergola on my back porch. Deciding to put the pergola on hold, I built an arbor instead. 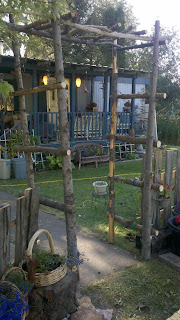 A view of the arbor.
(Top pieces are from the ash tree in my back yard.) 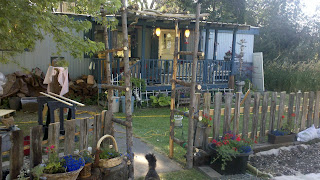 The finished project!
(Well... I still need to remove the junk laying about.)
There you have it! This is the start of my front yard project. Having several cedar fence pieces left, I decided to tie in the rustic theme by using left-overs to put on the door shed... 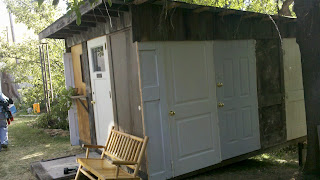 Notice the cedar fencing above the doors?
There are still two 8-foot sections of my Craigslist cedar fence that are in search of a second home. However, I've decided to carry the stump theme down the edge of the driveway to the corner of the front shed so the neighbor dogs can't get into my front yard. There will be another arbor (with a gate also made out of cedar fencing) to ensure my front yard is secure from "doggy" gifts. The pergola? It will have to wait because I don't have enough logs to finish that project now! The white picket fence? I saved it and put it on the south side of the house. The north side will have another fence of doors!
Next on the agenda? Who knows what whim will come my way for a new project. I have several up my sleeve but we'll have to see which one pans out.
Posted by Del Hungerford at 9:45 PM 2 comments: